*** The MetaStock Autumn Event Ends Soon! ***
Once a year MetaStock has an event offering reduced pricing on most of their products.

This is a great opportunity to e.g. get that add-on you have always wanted… This years event ends on 1 July – do not miss out on these Once in a Year Savings!

Tushar Chande’s Complete Toolkit for MetaStock adds value by moving beyond anticipation to participation by helping you answer the question, “What to trade?” (out of the thousands of stocks and ETFs to choose from)

Focus – What to trade?

The usual focus of technical analysis is on “How to trade?” and analysts employ various indicators or patterns to anticipate market action.

Tushar Chande’s Complete Toolkit adds value by moving beyond anticipation to participation by helping you answer the question, “What to trade?” (out of the thousands of stocks and ETFs to choose from).

In the long run, careful selection of what was traded can be much more profitable and impactful than how it was traded. In effect, since a system needs entries, exits, and risk management, TCCT focuses more on entries (participation) and exits. Its scanning tools can also help you quickly find trending stocks with MetaStock’s super fast scanning technology. 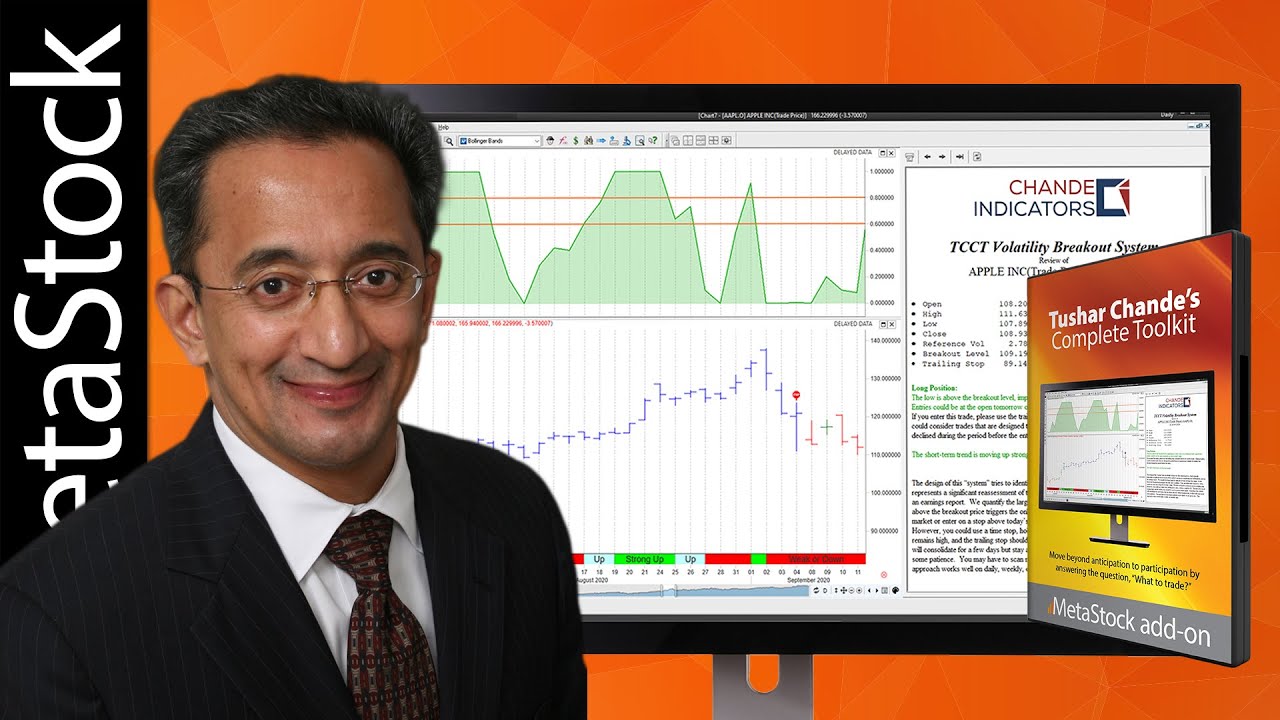 Tushar Chande designed the TCCT systems using the TOPS COLA principle (Take Our Profits Slowly, Cut Off Losses At once). Therefore, the systems favor “longer” holding periods to support trend-following strategies. The systems work well with the individual investor who wants to hold positions for the medium to long-term (i.e., more than one month to several months). Of course, short-term trading is also possible.

This “system” is a very long-term trend-following system, with very high levels of smoothing. That means the system will appear to be very slow to enter. The system uses a wide trailing stop so it can absorb a good bit of volatility and may seem relatively slow. However, should volatility increase too rapidly, it will stop out relatively close to the most recent high. So, the design is for patient position trading. There is a risk of a reversal soon after entry because the “system buys strength,” i.e., the price pattern will be overbought in the short-term and begin to look like a false breakout. So, risk management requires strict adherence to the exit stops.

This systems is designed to identify a counter-trend approach to buy strength after weakness. It assumes that the short-term strength will develop into a swing move lasting several bars. It is traded with a tight stop because the risk of reversal is high. A low above the reference band initiates the first entry condition. The entry stop could be placed one or more ticks above the high of the first bar with its low above the band. A follow-through beyond the initial breakout will give an entry. This approach tries to avoid reversals after the initial breakout but can also delay entries. The primary risk to this strategy is a series of losing trades if prices become trapped in a narrow range. Hence, you should carefully track the number of successive losing trades. You should avoid trading a given symbol if you get three consecutive losing trades.

The design of this “system” tries to identify large one-day jumps in prices, which typically represents a significant reassessment of the symbol’s prospects considering new information, such as an earnings report. We quantify the large jump by using the 20-day average true range. A low above the breakout price triggers the

only entry condition. You can either enter tomorrow at the market or on a stop above today’s high. We have set up the system to exit on a trailing stop. However, you could use a time stop, holding for n-days, where n could be 20. The risk of reversal remains high, and the trailing stop should be used to protect trade equity. Sometimes an instrument will consolidate for a few days but stay above the low of the breakout day, so this trade may need some patience. You may have to scan many symbols to get signals on any given day. This approach works well on daily, weekly, or monthly data.

Tushar Chande has traded the futures markets for high-net-worth individuals and institutional clients as a CTA and hedge-fund operator for more than fifteen years. He is the author of “The New Technical Trader” (with Stanley Kroll) and of “Beyond Technical Analysis”, two of the most important books on technical analysis in the past 30 years, and his indicators are among the most widely used and wildly popular. Literally, hundreds of millions of dollars have been traded using his ideas and concepts by hundreds of traders. He has a Ph.D. in Engineering, an MBA in Finance, and more than ten patents from the USPTO.

MetaStock has been providing award-winning charting and analysis tools for the self-directed trader for over 30 years. Capitalizing on technical analysis, our line of trading software and market data are designed for active traders of all levels so they can backtest, scan and analyze the markets with confidence.

The result is buy and sell signals you can count on. We have options for day traders, swing traders and EOD traders to trade stocks, options, futures, FOREX and more. Try MetaStock and we are confident you’ll agree that it’s the best charting software available to the private trader.

The Traders Edge is an Authorized MetaStock Reseller

You need to be signed in to access additional "member only" functions and features, or any applicable discounts. If you do not have an account yet, please select Registration Form above to create your FREE account...

If you do not have your password at hand, please use the Forgot Password link below and then provide your registered email address to be sent a password reset link.

Please create your FREE account to access additional "member only" functions. features, or applicable discounts - or select Login Form above if you have an existing account...
Manage Cookie Consent
We use cookies to optimize our website and our service.
Manage options Manage services Manage vendors Read more about these purposes
Preferences
{title} {title} {title}

Please confirm you want to block this member.

You will no longer be able to:

Please note: This action will also remove this member from your connections and send a report to the site admin. Please allow a few minutes for this process to complete.

You have already reported this
Clear Clear All